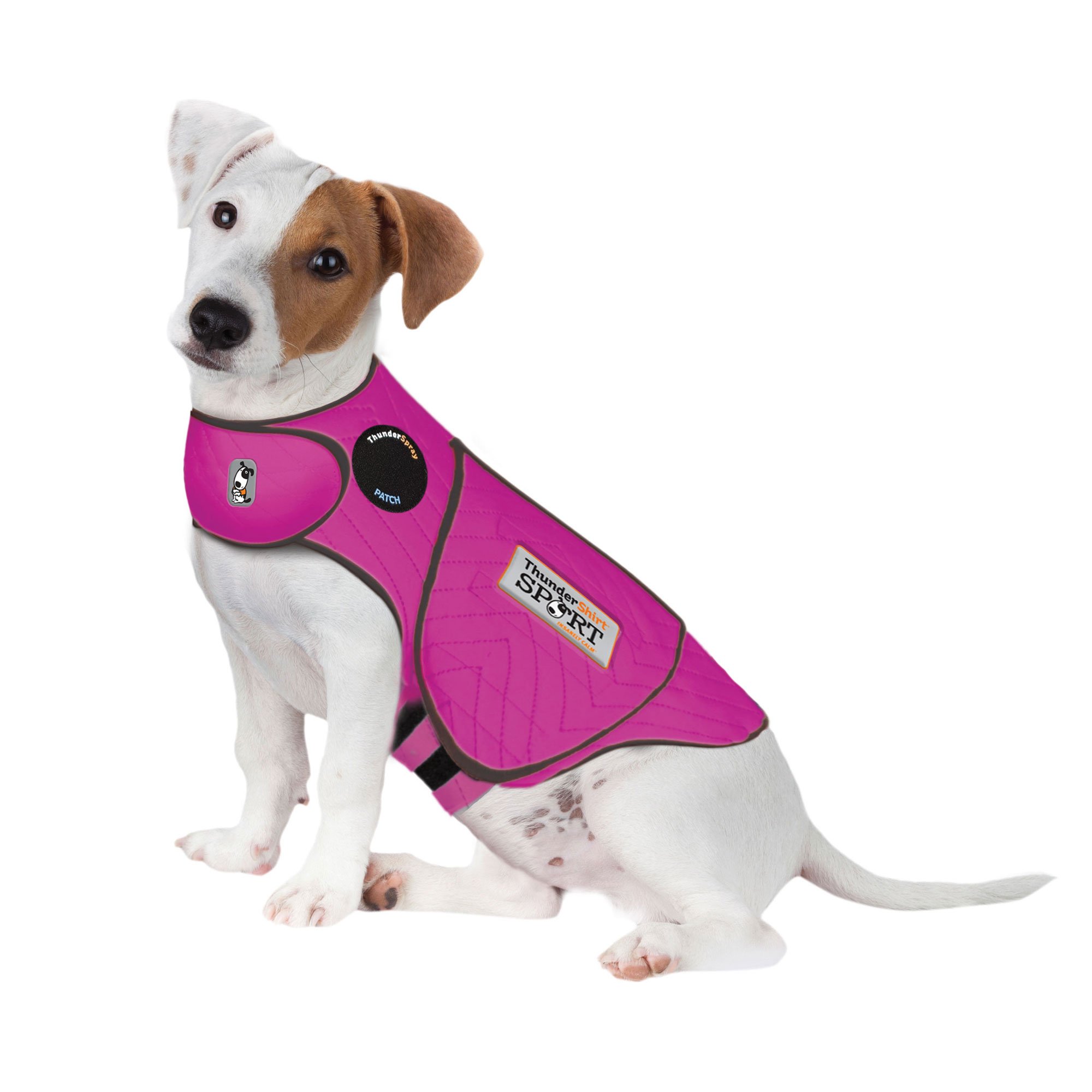 What is a Thundershirt?

If you're looking for the best product for dog anxiety which doesn't involve the use of medication, then look no further as we believe we've found the product that will alleviate your dog's fear, stress and anxiety. Quite simply a Thundershirt is an anxiety wrap that applies pressure which is very similar to swaddling a baby.

But don't just take our word for it. Take a minute and read real Amazon customer reviews.

Why do some dogs suffer?

There can be a number of reasons for anxiety in dogs. Occasionally, it can be an inherited trait that appears as soon as the puppy is old enough to interact. As many people do not know how to deal with their dog’s anxiety, the behaviour becomes worse as the dog becomes an adult. Much as we see a lack of confidence and anxiety in people, it can be worse for dogs as we cannot rationalize their fear to them, as we can to one another.

One of the most common causes of anxiety can be from poor socialization as a puppy. Puppy socialization, however, seems like an art form. Too much, for a nervous puppy, can overwhelm him and make him more afraid. But too little socialization, and exposure to daily life, can make him fearful when starts to see, and experience, things for the first time.

Always seek out a training class that does not have more than six puppies. If the trainer allows the puppies to just do their own thing, go to another class. Initially, all interaction needs to be under supervision to allow for nervous puppies to slowly gain confidence.

Poor handling of the anxiety can also escalate the issue. For instance, if you shout at your dog for being nervous, or if you cuddle him when he is scared, you are in fact reinforcing that there is something to be worried about.

The three most common types of dog anxiety are:

“Poppy belonged to a lady with Multiple Sclerosis so we don’t think she was socialized. She was also neutered very young. She was 7 months old, when she came to us, and the rescue said that she would occasionally woof at people. The issue didn’t materialize for a while as we live in a remote area. But then, she started to get agitated when we saw people or dogs. Over time, it escalated and, at first, I got cross with her because I didn’t know how to handle it and was embarrassed.

One day, she ran up to a couple that were out walking the trails we were on. She didn’t bark or jump up, she was really good. But, one of the couple was terrified of dogs and the woman started kicking out and screaming at Poppy who then came back to me, very afraid and shivering. Then, the woman stomped over to us, screaming and yelling at me that I should control my dogs.

Anyway, after that, Poppy’s behaviour became much, much worse. I was at my wits end and couldn’t bear to see how afraid she was. I was also worried that people would think she was vicious. I had heard about the Calmz® Anxiety Relief System from a friend, so immediately ordered one. I got Poppy used to it over about a week or so and then started to wear it out on walks. The difference was incredible; she was much calmer and able to cope. We have been using it for several months now and Poppy is a different dog. I can’t express the relief I feel and recommend the Calmz® Anxiety Relief System to everyone I know. I can truly say that the Calmz® Anxiety Relief System is simply the best product for dog anxiety. We can enjoy our walks again now, but most importantly, so can Poppy”

If you’ve found your way to this site, I KNOW you can relate.

The Symptoms of Anxiety in Dogs are:

Anxiety and symptoms of anxiety should NOT go untreated. The mental and physical stress experienced while suffering impacts the dogs health greatly; also ANY ONE of the symptoms outlined above can result in physical injury or danger to themselves or others around them.

Please Get Help For Your Dog Today

When a dog is extremely anxious the effect on him can be distressing. His body releases large amounts of adrenaline, which is a hormone that is typically called the ‘Fight or flight’ hormone. It is supposed to be for short bursts of activity.

How an Anxiety Product Can Help

My search for Best Product for Dog Anxiety

I searched Amazon.com for ‘Best Product for Dog Anxiety’ and my list was very similar to the list directly below this paragraph. There was also a sponsored ad showing anxiety vests.

While this aroused my interest, I noticed the top two products were in fact, bestsellers. Looking closer, the first category was ‘Horse Skin, Coat & Hoof Supplements, completely irrelevant. Quickly onto the next which was ‘Dog Relaxants’.

The Top 3 Bestsellers in the ‘Dog Relaxants’ category at Amazon

What stood out for me was that the top sellers are in fact remedies or chews (pills). What if you were trying to avoid administering medication to your dog and were ideally looking for another solution?

Well scroll on, because my next search was simply ‘Dog Anxiety Vest’ and found my solution.

If you are struggling to watch your dog in a state of anxiety, we highly recommend the use of the Thundershirt for Dogs. From the first use, you will see an improvement in your dog. Plus, the great benefit is, that the less your dog has the fearful response, the better he is able to cope when he does. Over time, your dog to learn how to manage his own anxiety much better than he currently is.

If you have any questions in relation to this article or in regards to our recommended product,  please do not hesitate to contact us.

Pet Camera Monitoring System – The Best Dog Camera Review 2018
Have you ever wondered what your dog gets up to when you are out? Does it worry you that he is alone and you cannot watch him? If you have a dog that suffers from separation anxiety, would you like to know what he does when you leave, and when you are away, so that you can take steps to help him to overcome his fears when you are not there with him?
Read More
What’s the Best Dog Vest – The Top 5 Dog Anxiety Vests
Living with an anxious dog can be challenging and a big worry for you. A dog vest can prove to be a positive choice to help a dog with anxiety.
Read More
Vetri-Science Reviews
In this article, we are featuring a small section of products from the Vetri-Science range, notably products that can help with anxiety and stress.
Read More
Thundershirt Dogs Reviews
Here we are going to look at Thundershirt Dogs reviews. You can then decide if this product would be suitable for your dog's anxiety and stress.
Read More
Petmate Calmz Anxiety Relief System for Dogs
With such a vast range of products on the market that profess to produce a calming effect for your dog, you may be overwhelmed at which choice to make.
Read More